Thank you for your patience while we retrieve your images.

It WAS kind of different, even a little funny, because I had some unique difficulty to pick some good pictures of John,. Where John was not making what appeared in a still picture to be funny faces. When seeing him live and if it was caught on video, it would be part of the act. But the still shots had him making faces at the audience. So, I wanted to make sure that didn't get taken out of context.

I had not heard much of his music before I went. But I did recognize the famous songs "Waiting on the world to change", "Say", and "Free Fallin'".
© SnapJag Photography 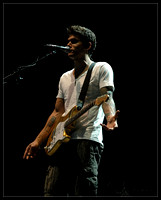